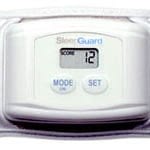 The SleepGuard Biofeedback headband is an innovative product which aims to reduce pain and discomfort resulting from bruxism. Bruxism is a habit of unconscious jaw clenching which can cause tooth wear, jaw pain, and headaches. It is generally treated using mouth guards, but mouth guards only try to prevent tooth wear and don’t address the underlying problem. The SleepGuard seeks to use biofeedback conditioning to eliminate the habit entirely and is aimed at individuals who have not had success with a mouth guard alone. 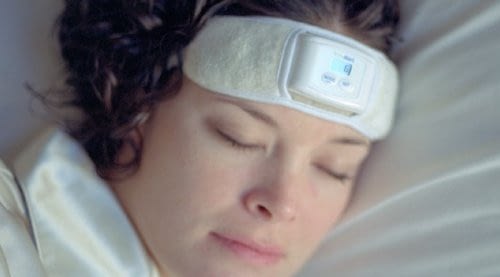 Do You Suffer From Bruxism?

If you often experience headaches, jaw pain, or ear pain in the morning, you might be suffering from sleeping bruxism. Bruxism refers to when unconscious teeth grinding or teeth clenching leads to excessive tooth wear or pain in the jaw joint or muscles. Extreme cases may lead to TMJ or Temporomandibular joint inflammation, inflammation of the jaw joint, which is the second most common cause of facial pain after dental pain. Bruxism is a common disorder that more than a third of the population suffers from, according to some studies. Many people are unaware that they suffer from it, as the clenching occurs unconsciously and frequently while you’re asleep. Though causes vary and are sometimes unknown, bruxism is frequently related to stress. It may start as a conscious activity but persist as an unconscious habit, even if the stress is removed from your life.

Bruxism, while not life threatening, can certainly impact your quality of life. The most common first line of defense against the damage of bruxism, which you might already be using, is wearing a mouth guard. However, a mouth guard will only prevent further damage to your teeth, without breaking the damaging habit of teeth clenching or grinding.

What Is Biofeedback And How Can It Help You?

Biofeedback refers to the practice of becoming aware of involuntary activities in order to gain control over them. Biofeedback sometimes relies on equipment which tracks your body, giving you real time information on what your body is doing. Research has suggested that biofeedback can be effective at reducing migraines and headaches.

Lee Weinstein, a former MIT professor and designer of medical equipment, patented the biofeedback headband in 2000 and was marketing it starting in 2001. In 2007 the patent was acquired by Holistic Technologies and has been marketed as the SleepGuard Biofeedback Headband since then. Unlike mouth guards, the Biofeedback Headband seeks to reduce or break the bruxism habit, rather than just treating the symptoms.

Breaking the bruxism habit, instead of just preventing tooth damage, is especially important because of how it affects your sleep. People only clench and grind their teeth while in shallow sleep, but stop once they enter deeper REM sleep. The discomfort and effort of clenching and grinding teeth can sometimes prevent you from entering REM sleep, leading to poor sleep and chronic fatigue. That’s another reason a solution like SleepGuard, which tries to get rid of the habit itself, is important.

The Biofeedback Headband can be used to both self-diagnose and treat bruxism. When the headband is worn it uses EMG (electromyography) to detect activity in the jaw muscles. It records even brief clenching activity, allowing you to track your own behavior and determine if you do suffer from sleeping or waking bruxism. If you do, the headband can then be configured to produce a sound which alerts you that you’re clenching your jaw. You can then make the choice to unclench. This feedback allows you to break the habit of clenching, reducing its negative impact on your life. A few sessions is often enough to significantly reduce a habit which you might not even have been aware of previously.

You can change the volume of the sound and force necessary to trigger the headband. The headband can detect bruxism events that are as brief as 0.2 seconds. The headband stores information on clenching events, which allows you to track your bruxism and evaluate whether the product is having an effect.

You might find yourself wondering, how does the headband help with sleeping bruxism? The answer relies on what is known as Pavlovian conditioning. Named after a famous experiment with dogs by the Russian scientist Ivan Pavlov, it refers to a way of manipulating or promoting behavior by forming associations with a neutral stimulus and a particular action. In the case of SleepGuard, your training sessions with the headband form an association with hearing the sound the headband produces and the decision to stop clenching your muscles. Once this association forms, after a few days of training sessions, the sound the headband produces will cause you to unconsciously relax your jaw muscles. This association can persist even while your asleep, so that you will stop clenching when you hear the sound. The sound is faint and generally won’t wake you, or your partner, allowing you to continue sleeping while the headband does its work.

The SleepGuard biofeedback headband is powered by two sets of watch batteries which will provide about 320 hours of activity, more than a month of consistent nighttime use. The device is equipped with shielding to prevent negative electromagnetic effects on your energy. Batteries can be purchased from electronics retailers and from the headband manufacturer. The whole device is less than 2 ounces and is one size fits all.

If cost is a deterrence, the headband can be paid for in installments and also has a 21 day money back guarantee.

One clinical trial with 92 patients using the SleepGuard Biofeedback Headband was conducted in 2010 by its inventor Lee Weinstein and was presented at the 2011 U.S. conference for the Sacro-Occipital Technique Organization (SOTO). The study used data from the headbands to track time spent clenching by patients over the course of 30 days. The trial suggested that three daytime training sessions are generally sufficient to establish conditioning. This allows effective use of the device while asleep. About 75 percent of the patients showed a rapid 60 percent reduction in nighttime bruxism incidents with in the first few days and reported a subsequent reduction in head and jaw pain. More than half of the participants had their clenching reduced by about 80 percent after a month of using the biofeedback headband. These positive results mean that a larger and longer study will soon be underway under the direction of a neurologist in Buffalo, New York. The device has been FDA approved.

While not all patients respond to the headband and biofeedback’s use for curing bruxism is still under scientific consideration, it is clear that the SleepGuard Biofeedback Headband has positive preliminary research results and mainly favorable user reviews. It is lightweight, comfortable and has a free trial which is long enough to ensure that you know whether or not it is working for you. It is the leading product which attempts to actually address the cause, rather than just the symptoms, of bruxism. It also allows you to self diagnose and track and evaluate your own progress using the headband itself. We hope we took care of any questions with this SleepGuard Biofeedback Headband review. If you’d like to share your experience with this product, leave a comment.

What Users Are Saying

The SleepGuard is available on Amazon and it has garnered largely positive reviews from users. Holistic Technologies, the company which produces the devices, is reported as being responsive to questions and having solid customer service. They have answered a number of user questions on Amazon. While some users express concern with the cost, it can be paid for in installments and there is a 21 day money back guarantee.

Certain content that appears on this site comes from Amazon Services LLC. This Content is provided ‘as is’ and is subject to change or removal at any time.